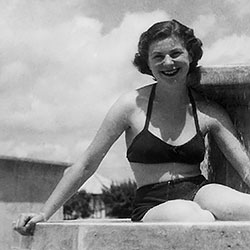 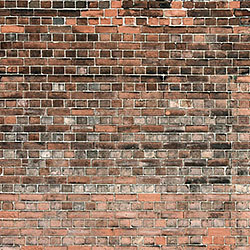 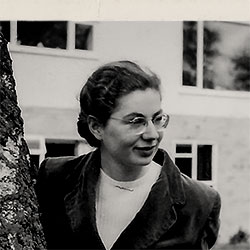 The Story The Blog All Posts The Film

“Brilliant, brilliant work”
“Extraordinary filmmaking and storytelling”
“Masterfully crafted and a haunting work of art”
“Blown away… the best yet from the prodigiously talented May Miles Thomas”

‘Voyageuse’ screened for the first time in March 2018 – to a rapturous response. It’s the culmination of over three years of work, the craft of one individual and thousands of decisions – financial, practical and creative – to make a film in a truly independent spirit.

Based on the life of my late mother-in-law, Erica Thomas, ‘Voyageuse’ is a mix of romance, science and conspiracy drawn directly from her archive of personal films, photographs, letters and objects. In a compelling performance by Siân Phillips, the film depicts Erica and her family’s role in the most profound events of the twentieth century: WW2, the Cold War and the decline of the British Empire; an era fading from living memory.

From her birthplace in rural Hungary to Great Britain via the US, Antarctica and Outer Space, Erica’s journey takes place in fragments of time in her incisive but troubled mind. Seeking solace in the past, she conflates middle-class domesticity with a sinister blueprint for global domination, with her mother cast as a latter day Mata Hari; her father, a technocrat and the model for Ian Fleming’s Bond villains; her older brother and nemesis, Eddi, enlisted by MI6 at Cambridge, and her cousin, Thomas Polgar, ex-OSS and a leading light of the CIA.

To make ‘Voyageuse’ – less a biopic than a psychobiography – I have followed in Erica’s footsteps, documenting all the places where she had lived, studied and worked. My aim: to recreate her state of mind, not as some cautionary tale of how not to live but to understand what it means when the future is outweighed by the past, a prospect faced by us all.

This blog describes my journey and the many creative decisions involved along the way: from writing the screenplay to the shoot; through the many stages of post production to completion. During the next phase of this project I face a new challenge: to reach an audience. While I still have far to travel, I hope by making “Voyageuse” I’ve fulfilled my promise to Erica by giving her story a gentler and more redemptive ending.

If you have thoughts, comments or questions, I’d love to hear from you.